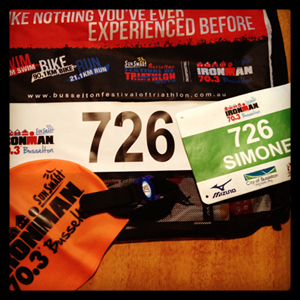 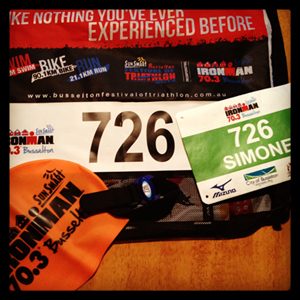 I completed my first Ironman 70.3 in Busso on Saturday May 3rd and it was one of the BEST days of my life. The conditions were perfect, I had an awesome support crew, I felt great for most of the race and I achieved all ten of my goals that I set for the race, which was a surprise bonus! It was so epic partially because I never thought up until last year that I could even attempt a 70.3, let alone enjoy it and achieve good times. Now today’s blog is a bit long so grab a cuppa and settle down for a good read.

To understand why this goal was so important for me you need to know a bit of my back ground…I first started working in Sports Nutrition back in 2003. I was still training and coaching gymnastics at the time. Training was long but everything was short and sharp – nothing resembling aerobic exercise. While as a gymnasts I was flexible and strong, I couldn’t run more than 2-3kms, or swim more than 50m, I didn’t own a road bike (and didn’t right up until September 2013). When one of my first athletes as a Sports Dietitian was a triathlete, I couldn’t quite get my head around the concept that you raced for over an hour and called it a “sprint”. Seriously?! 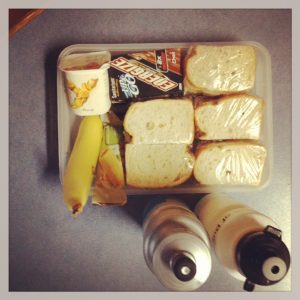 Fast forward to May 2010, I have a 2 yr old and a 2 week old and I’m once again down at Busselton for the “half” (now known as Ironman 70.3) working at the expo. By this stage I’d been working closely with triathletes for over 10 years, I had just retired from coaching gymnastics and had started swimming, mainly because it was easy to do when I took my toddler to swimming lessons. Working at the expo I was often asked “Are you racing tomorrow?”, and while the concept of attempting the whole race was still not on my radar, I start to consider that I could try to do the 1.9km swim as part of a team.

I have to say you triathletes are just so darn inspiring. The more triathletes I worked with, the more it showed me that no matter what age, fitness level, background or body composition, with the right training, anything could be achieved. Triathlon WA, you create an environment that is encouraging, supportive and totally positive – a commendable achievement that many sporting organisations will never get close to.

So, 2012. Great year to do the swim right? (read about it here) Despite the less than ideal conditions I loved every minute and completed the leg in 42:53. This year I noticed that some people were doing two legs of the race…hmmmmm…that could be do-able? Worth a try anyway…run it is as the bike still freaked me out…too many things to go wrong!

2013 I completed the swim and the run legs in 38 mins and 2 hrs respectively (read about it here). At the awards dinner that night, after about 4 million athletes had asked me if I would do the whole race, I decided that even though the training would be hard to juggle (I had reminded myself about thirty times prior to the race in 2013 how hard it was to fit in training for 2 legs and doing the whole thing was NOT to be agreed to) somehow though that changed to…maybe it is worth giving this Ironman 70.3 a crack. Triathletes 1: Sim 0 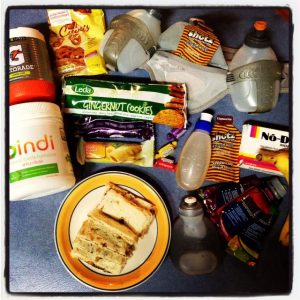 Training was tricky to complete but I felt pretty awesome completing rides and brick sessions I never thought possible (read about it here). It didn’t help though that I contracted Parvovirus B19 (the adult version of kids slapcheek, like chicken pox and shingles, the adult version is not so fun) in September 2013 which left me unable to run at all, or swim more than 50m as I developed a form of arthritis from it. Recovery time was at least 6 wks according to my GP. How the heck was I going to be ok for full training in January? With plenty of physio from the legends at Ascend Physio and good advice from my coach, Brian Kempson, I managed to slowly but surely get back on track. It took 12 weeks but by December I was able to swim (albeit slowly) 500m and I was able to jog/walk 4km. Thankfully it just got better from there! Training throughJanuary to April was spot on, I was able to complete most trainings and, with some awesome support from my better half, we were able to manage the work/family/training juggle. My nutrition was pretty good too.